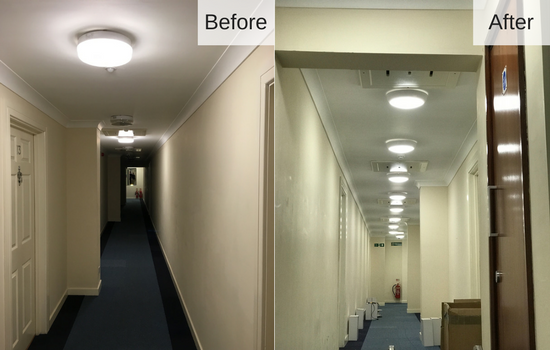 Lighting controls can reduce lighting usage significantly – usually between 30% and 80% depending on the usage profile and the nature of the control system.

With lighting accounting for around 20% of electricity use in the UK, the issue of lighting control, particularly in commercial buildings, forms a key part of the drive to reduce energy and carbon emissions.

Part L of the building regulations requires local control of the lighting, which offers the opportunity to create lighting control zones with appropriate controls for each type of zone, based on the ‘ownership’ of the workspace and the availability of natural light.

For example, a corridor which would be regarded as being ‘unowned’ in that it is not an individual employee’s workstation, with minimal daylight and low occupancy, would, under Part L potentially be fitted with presence detection and a manual on / timed-off capability.

We have rarely visited an open plan office in which every bank of desks is occupied; yet often we find that every light in the office is operational. Zoning the lighting would save significant energy. Furthermore, employees often prefer to retain an element of control over lighting in their individual work areas especially when there is access to natural light. In this situation, a zoned ‘request on’ ‘auto off’ absence control could be implemented, along with daylight sensors and the ability to dim lighting to comfortable levels for the zone.

Controls typically allow some or all of the following:

A good control system should combine utility with energy saving, whilst enhancing comfort and safety.

Standalone lighting controls allow ‘standalone’ control of the lighting within a space, typically a single room. Controls may include switches, occupancy sensors, photocells and time clocks (see below), which are typically hard-wired to control fixed groups of lights independently. Adjustment of these needs to be made manually at each device location.

In contrast a centralised lighting control system refers to an intelligent networked system of devices relating to lighting control. The system has user inputs, a processing unit with a programme to process the signals (typically centralised within a building) and a method of controlling the lighting fixtures based on the outputs of the programme. The control programme can usually be changed centrally. The application of local controls such as occupancy sensors can be varied according to time of day, time of year and other ‘input conditions’.

User inputs may be made locally by switches, occupancy sensors, photocells, centrally at central processing units via software programmes, or remotely by smartphone / online app. The system may also accept signals from other building systems, such as fire alarms.

The system allows the building manager to have centralised control of all of the circuits in a building from a single user interface or app. The ability to control multiple light sources allows complex ‘scenes’ to be created across the building. An obvious scene is “all off” in which every light in the building is turned off in response to one input. The offices on a single floor could be put into “evening mode”, or all lights in the building could be turned on at the start of the working day.

The system can cover lighting alone, or it can extend to some combination of lighting, security, windows, blinds, temperature controls, sound systems and other applications, and can also interface with the alarm system. The technology makes the building much easier to manage, and should also result in significant energy savings.

In general with LED retrofits, we install standalone lighting controls, with a set of controls per room. These are simple to retrofit, requiring primarily localised wiring changes, and thus are very cost effective.

Typically we will install some combination of the following:

For more information, see Standard Local Controls. Or, learn more about our lighting as a service package for commercial clients: