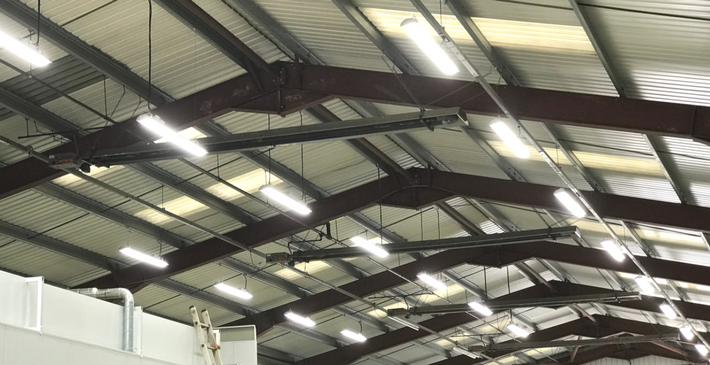 Installing LED lights is one of the most affordable and simple ways to reduce your energy consumption.

LED bulbs are up to 90% more efficient than conventional lighting systems. Replacing a typical halogen 50W bulb with its equivalent 5W LED light can save you around £10 per year (assuming it’s on for 5 hours a day), for one bulb.

A typical LED retrofit will reduce your lighting bill by 50%. By introducing or upgrading the lighting controls (absence / presence detection, dimmers, daylight harvesting), the savings can be boosted to 70%.

Bulbs last up to 16 times as long as their halogen equivalent. Unlike incandescent or fluorescent bulbs, LED lights do not suddenly stop working when they reach the end of their life.

Instead, they eventually start to get dimmer. The industry standard is to use a value of 70% output as the end of life, as this is when it becomes noticeable and the bulb needs replacing. The lifetime varies a lot between manufacturers and bulbs, but as a rule of thumb a value of 50,000 hours can be used.

Compared to halogen bulbs which last around 3,000 hours, this means if you do not upgrade to LED you will need to replace your light bulb 16 times before someone who switched to LED would have to replace theirs!

Even compact fluorescent lamps (CFLs), which last around 10,000 hours, would need to be replaced 5 times before an LED would. LEDs are roughly twice the price of halogens and CFLs, so as soon as you need to buy your first replacement halogen or CFL you would already be at the stage where you were better off buying an LED in the first place. However, it is not only the cost of buying the bulb that needs considering but also the cost of replacing it which can be considerable for lights that are inaccessible e.g. a warehouse.

Note that a well designed system will ensure that the ‘end of life’ lighting level still provides sufficient light. Inevitably, the initial lighting will be too high, but this can be managed using dimmers and other controls.

Much less heat as a by-product

Higher efficiency means less energy wasted as heat. One of the reasons LED lights are so energy efficient is because they emit hardly any heat compared to halogen bulbs, and significantly less than CFLs still. In CFLs, the filament temperature can easily reach over 2,500 degrees celsius, with over 90% of energy emitted as heat. While it is true that heat emitted from your light bulb contributes to space heating, it is false to think that this will save you money on your heating bills for two main reasons:

So as well as reducing lighting bills, switching to LED can also reduce refrigeration and maintenance costs.

Flexibility in design and controls

LEDs tend to allow much more flexibility in lighting design and controls than traditional lights:

Robust materials with no toxic components. Halogens and CFLs have a glass enclosure which as we all know is very fragile and prone to damage during transport and installation/removal. For CFLs in particular this is a very serious problem because they contain mercury which is extremely toxic to both human and animal health.

LED lamps are usually encapsulated with a polycarbonate diffuser which makes their transport, handling and storage a lot safer and less prone to damage.

LED lighting as a service

At Spirit, we now offer LED lighting as a service for large commercial clients. Your lights are updated to the latest technology at no upfront cost, instead paid off through a proportion of your bill savings over 5 years. Maintenance and replacements are included for this period.