Our phone lines are currently down  ·  Please email info@spiritenergy.co.uk

Victron Energy has a long-standing reputation as a provider of battery storage systems for use in automotive, marine, industrial and solar applications.

Victron manufactures inverters, battery chargers, inverter / chargers, batteries, battery monitoring systems and switchgear, and is known for technical innovation, reliability and build quality. Its products are widely considered to be a reliable professional choice for the management of independent electric power.

Victron Energy is a Dutch company. However it offers full technical support in the UK.

Most systems are AC-coupled, using an inverter / charger to connect the battery to the electrical system. Victron offers two different configurations for AC-coupled systems, known as Hub 2 and Hub 4.

Both configurations optimise self-consumption of PV generation by diverting excess electricity into the batteries, but they do it in slightly different ways and have a slightly different emphasis. They are compared and discussed in detail below.

Overall, Hub 4 is our recommended system of choice where optimisation of self-use is the key consideration, and backup is secondary, particularly if the home is occupied in the day.

Hub 2 is recommended when backup is the key consideration, since Hub 2 will back up the whole house, and the PV will continue to function in a power cut. If required, Hub 4 does provide a backup, but it generally only backs up critical loads, and it may be necessary to wire these loads to a separate sub-board.

Generally in the UK, backup is not the key consideration, and so Hub 4 is the system of choice. Hub 4 allows for a smaller charger than Hub 2, and as a result is likely to be cheaper. The overall Hub 2 cost will depend on whether or not there is a need to install a sub-board (separate consumer unit) to which critical loads are wired.

The table compares the two systems:

In a Hub 4 setup, the inverter/charger is installed in parallel with the grid, as on most standard AC-coupled installations. This is shown in the schematic below.

When the grid is running, the system functions as follows:

If the grid goes down, the PV will stop functioning. Critical loads (if any) will be powered by the battery until the battery is empty.

Note that, in contrast to the typical Hub 2 setup, with Hub 4 the batteries will be discharged during the day as well as at night. If the daytime loads are quite big, the batteries may be charged to full capacity more than once during the day, making their use even more efficient.

With Hub 2, the system is usually set up to harvest solar power in the day and then utilise it at night.  In the most typical configuration (“disconnect at night”), the batteries will not be discharged during the day (as they would with Hub 4). This may slightly reduce the level of self-use in a house which is occupied during the day but still has a lot of excess PV generation.

In the event of a power cut, the PV system will remain operational and can backup the full house load. There is no need to rewire critical loads to a separate sub-board.

The Hub 2 system has four operating modes as follows.

Note, whilst (1) and (2) are primarily aimed at optimisation of self-use, it is still possible to specify a minimum state of charge on the batteries, such that there is always a minimum power availability should a power cut occur.

Note that in all Hub 2 modes, the PV will function in a power cut. The battery inverter / charger must be as big as, or larger than the grid inverter (or PV array size if smaller than the grid inverter rating). In addition the battery inverter / charger needs to be able to regulate PV power production by output frequency variation. Such frequency / power regulation must be supported by the PV inverter.

Hub 2 has a winter mode which instructs the system to keep the batteries charged from either solar or grid energy, whichever is available. The purpose of this mode is temporarily (during winter) to set the system as a back system rather than a self-consumption system. This switch also prevents batteries from remaining discharged for long periods of time during winter when there is very little solar available.

Both Hub 2 and Hub 4 are AC-coupled systems. It is possible to configure the equivalent DC-coupled system, in which a charge controller replaces the traditional PV grid inverter. The PV panels feed directly into the battery or into the single inverter / charger which will convert DC to AC as required.

The Hub 1 schematic is as follows: 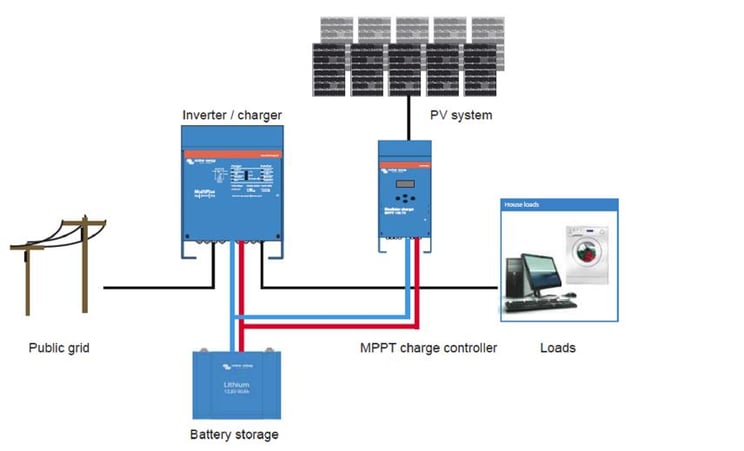 The two main Victron components required for any system (apart from the battery) are as follows: 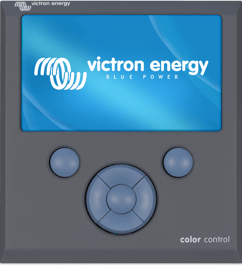 The key features of the Multiplus Inverter / Chargers are as follows:

The Quattro has similar features to the Multi. They also include: