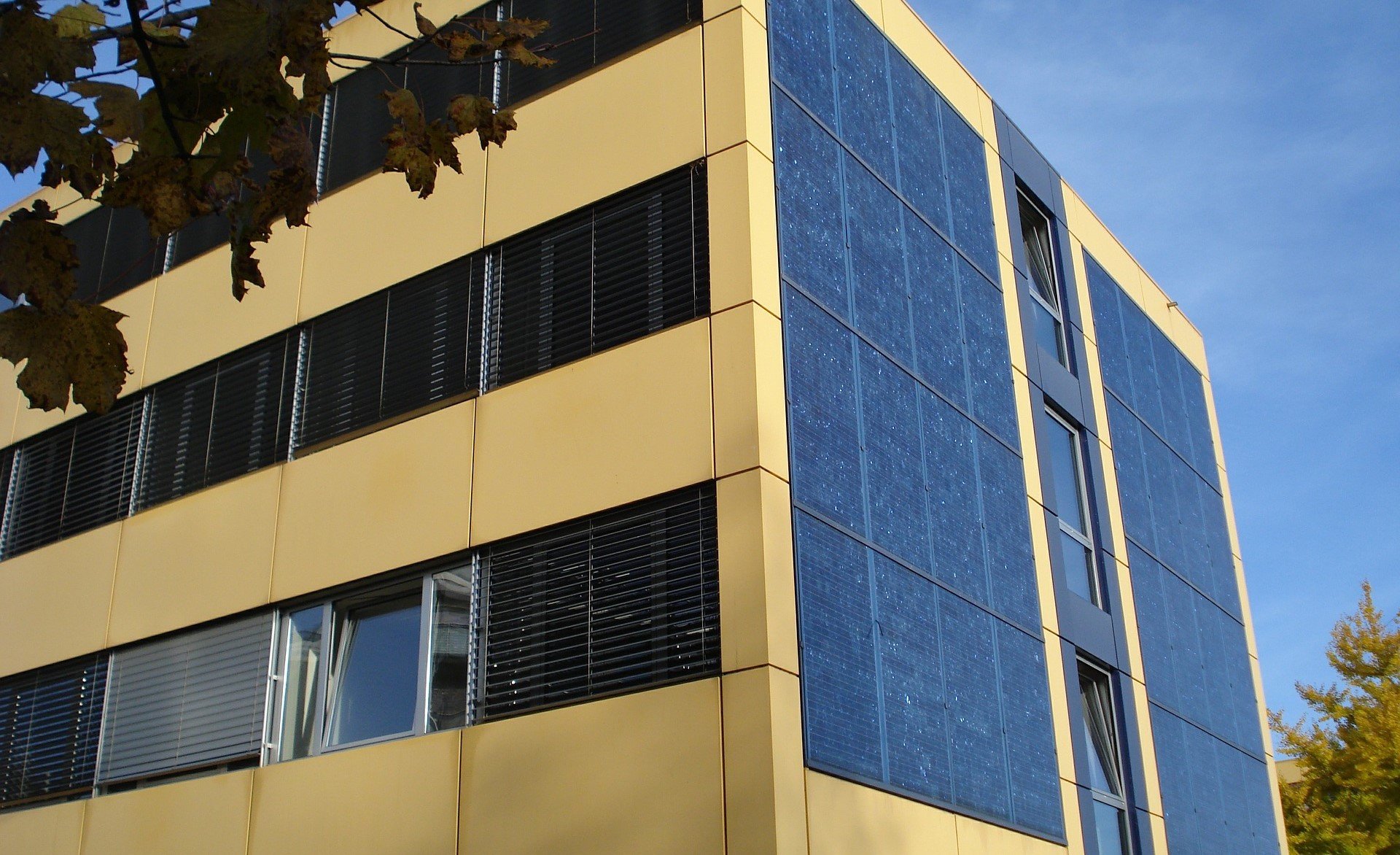 We can distinguish between integrated and building applied photovoltaics (BAPV), which are the more common method of adding panels to existing structures. Applied PV is more suited to and cost effective for retrofits, while integrated PV has its own advantages but is more applicable for new builds or being implemented during construction work.

The main benefit of either kind of PV on the building is generating free, clean energy on site, where it can be used most efficiently without transmission losses and contribute to a more sustainable future by displacing the need for fossil fuels.

BIPV in particular has certain pros:

Integrated photovoltaics serve the function of the traditional building material they are replacing (eg cladding or roof tiles), meaning you save on buying those materials but do pay extra for the PV components and electrical installation. The system does of course generate free electricity, which gives its return on investment. Some types of BIPV, such as solar glass, also bring additional savings through their insulating properties.

By weaving PV into the design of the building, you can add architectural interest through striking solar glass or shading structures. You also have a lot more flexibility in the design, since the panels can be manufactured and installed to be as discreet as possible, or built as their own design feature that highlights a commitment to sustainability.

Diagram used with permission from Polysolar.

Roof integrated solar panels are like traditional on roof panels, except they are installed in place of a section of tiles and act as the roof covering themselves. Many people prefer the aesthetics of in roof panels, as they’re almost flush with the surface. Due to the reduced ventilation, roof integrated PV is around 5-10% less efficient than on roof. But the design appeal outweighs this for new builds and refurbishments, where they are very popular.

Extending the idea of integrated panels, you can forgo traditional roof covering entirely and have a complete solar roof. With specially designed modules, panels can be fitted across the whole roof area, with dummy panels used in place where generation isn’t feasible (eg shaded or north-facing parts).

If the appearance of traditional panels is off-putting, then solar tiles may be the way to go. PV units that emulate regular roof tiles are a developing area, but there are already some impressive products available. When the whole roof is fitted with PV or dummy tiles, you can’t tell the difference.

Thin film is a type of solar module that is often used in BIPV systems. In comparison to typical crystalline technology, it’s made from incredibly thin layers, resulting in a material that can be used on curved surfaces or semi-transparent facades. While thin film has a lower efficiency, it performs better in low light, high temperatures or unfavourable angles.

Replace traditional glazing with solar glass to generate electricity where roof space is limited, which is often the case with multi-storey buildings. Solar windows and skylights can be made fully opaque or up to 50% transparent, in a variety of colours.

Besides energy generation, solar glass has the benefits of reducing glare and improving temperature insulation - both of which are vital in large office buildings. PV glazing reflects infrared light, reducing heat transfer through the glass. This helps keep heat out during summer and in during winter, resulting in a more consistent internal temperature - a need for which offices often use low emissivity glass.

Diagram used with permission from Polysolar.

Many large multi-storey buildings install curtain walling or facades to improve energy efficiency or appearance. BIPV facades can fulfill this purpose with the added impact of free, clean electricity. While they can be constructed from crystalline panels, thin film solar is generally used for its superior performance at vertical angles and in shade - since the sides of tall buildings are generally vertical and shaded at times.

The multilayered materials in BIPV also enable it to offer noise insulation when used as a building covering. 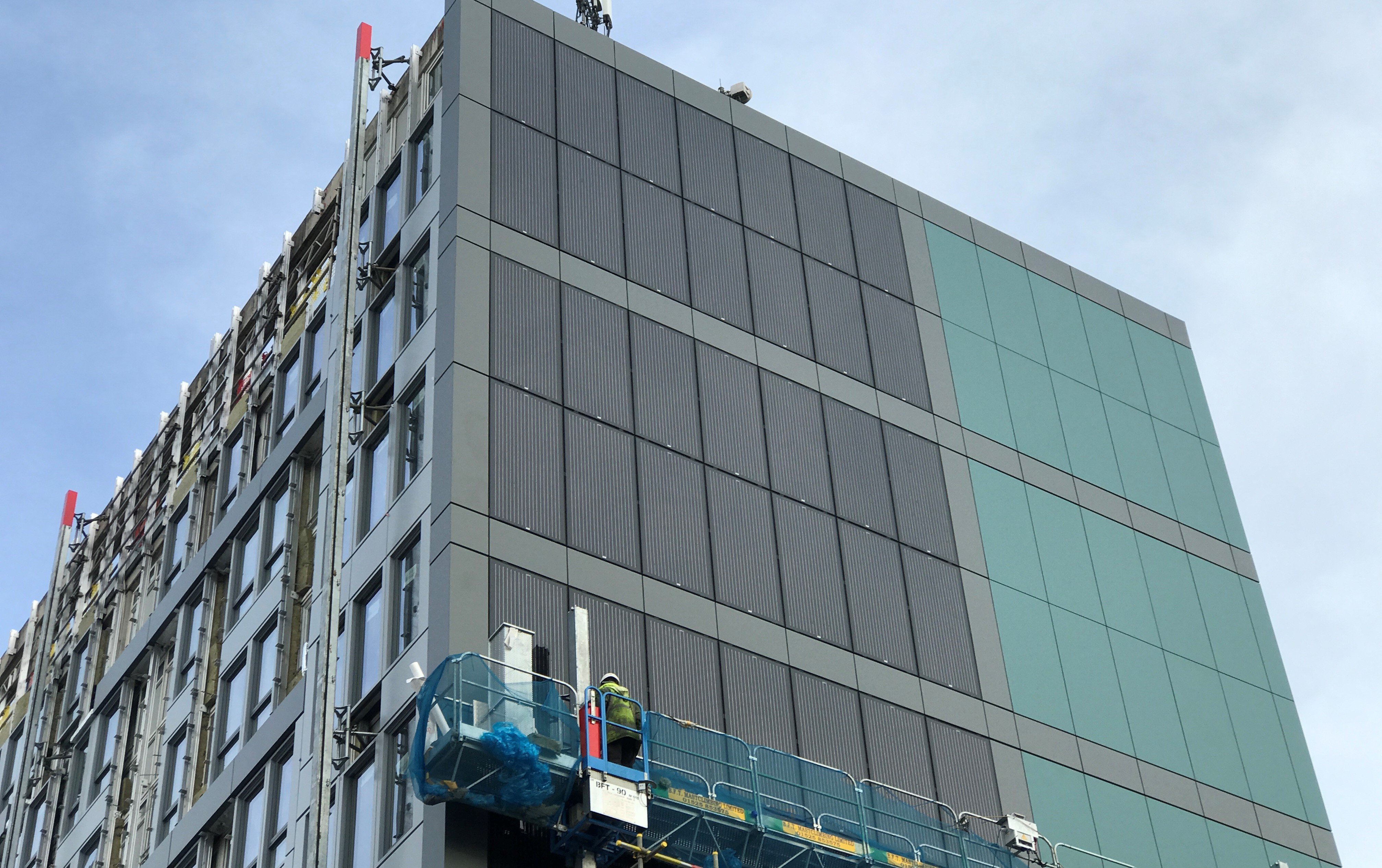 Coloured panels can be made for a particular aesthetic or to match existing buildings. Standard colours are blue/black for crystalline and brown/black for thin film, but layers of coloured laminate or glass can be used to achieve alternative colours. Colouring the modules does result in a 5% decrease in output.

In order to reduce the intensity of sunlight hitting a building, freestanding or integrated shading structures come into play. These can of course be combined with PV to offer solar shading, while generating solar power.

Carports offer another opportunity to install rooftop solar, for additional power generation or where the main roof isn’t suitable. When building a new solar carport, generally you have a bit more flexibility for choosing optimal roof orientation and angle. As we move towards a world where we’re all driving EVs, it makes sense to combine sheltering vehicles with charging them. 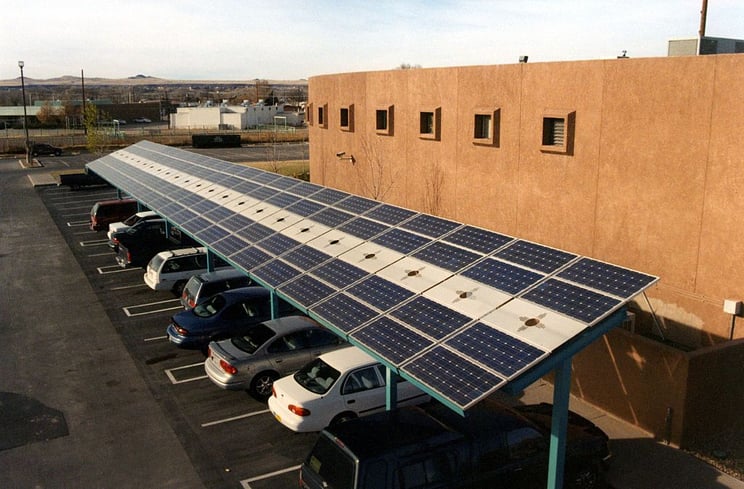 Another type of technology used in BIPV are flexible solar panels. Made from either lightweight crystalline cells or thin film coated in plastic, they can be bent or curved to fit more complex structures.

BIPV is a great choice for tall buildings in urban areas. The taller a building, the greater the facade area is relative to roof space, which is often used for other equipment like air conditioning units. So city structures often have more space available for PV on the sides of the buildings and windows than for traditional roof panels.

Placement on the building is key when choosing which technology to use. For example, conventional crystalline panels need to be at an optimal angle in direct sunlight to work effectively, so are generally only suitable for the rooftop. Thin film takes in ambient light (reflected or diffused), so is suited to vertical faces and non-south facing surfaces. When integrated into the building, limited ventilation can cause a build up of heat around the panels, which affects efficiency and performance of crystalline modules much more than thin film.

When designing your BIPV system, you should also consider cleaning and maintenance. Panels in dry, dusty or polluted areas will require some cleaning, especially if mounted flat. Ensure access to them is practical in the future.

BIPV systems can be divided into sections based on similar expected outputs and environmental conditions, each of which with its own optimally sized inverter.

The PV equipment for building integrated solar generally comes with a 25 year guarantee.

If you’d like to discuss a project involving any kind of BIPV, please give us a call on 0118 951 4490 or email info@spiritenergy.co.uk.