SunPower makes the best high performance solar panels on the market, offering up to 35% increase in lifetime generation from the same roof space and the best warranty on the market.

If you've done even the slightest bit of research on solar panels, the chances are you've come across the name SunPower. Founded and based in Silicon Valley, SunPower has come to dominate the residential solar industry with their premium high efficiency panel offering. But what makes the SunPower brand so special, if indeed it is?

The principal factor behind SunPower's success is its leading solar cell technology. SunPower solar cell efficiency is the best on the market.

SunPower produces a range of high efficiency solar panels with efficiencies of up to 22.6% thanks to their patented back-contact cell design which maximises usable collection area (see below). On top of market-leading efficiency, SunPower also offers the best warranty on the market, both in terms of defects and performance. Finally, SunPower is backed by Total, the world's 6th largest public energy company.

Maxeon is the absolute premium product, with the highest efficiency of any panel on the market. Two generations of Maxeon are available, Maxeon 2 and Maxeon 3.

The third generation panel, Maxeon 3, has managed an impressive 11% increase in efficiency. The panel outputs range from 355W to 400W, equivalent to a peak output of 201W to 226W per square metre. The all-black versions are slightly less efficient (because the darker colour increases module temperature), and so cover the lower output range.

Performance is a slightly lower efficiency (and less expensive product), similar to other monocrystalline panels in cost and performance. Again there are two ranges, one for Residential and one for Commercial. The Residential and Commercial panels have similar efficiencies (similar output per square metre) but the Commercial panels are physically bigger, and hence output more per panel.

SunPower has spent over US$450million on R&D in the last 10 years; it is thus unsurprising that the company holds more than 750 patents. The underlying technology that gives rise to SunPower's superior panel performance is their patented Maxeon solar cell. 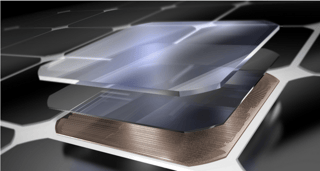 These solar cells differ from conventional cells in that they utilise back-contact technology, which means no current collecting wires ('fingers' and 'busbars') on the top surface of the cells. Maxeon cells instead employ solid copper backing sheets to provide both the positive and negative electrical connections at the rear of the cell. As a result, the top surface area is maximised for better absorption of sunlight.

The copper foundation also offers durability advantages over the porous metal paste used for front and back contacts in conventional cells. Maxeon cells are less susceptible to cracking and corrosion - the two main causes of cell degradation.

Superior performance: up to 35% higher lifetime output from the same space

In addition, the output from SunPower solar panels degrades at a much lower rate (around 0.25% per annum for Maxeon and 0.5% for Performance, instead of the standard 0.70% degradation). Furthermore the panels exhibit superior performance in hot rooftop conditions, and in partial shade.

Overall SunPower claims that a Maxeon 3 panel will produce as much as 35% more energy over the life from a given space than a similar rated standard panel. Just under half of this is due to reduced degradation and better 'real-world' performance, the rest is down to higher efficiency.

This ‘output premium’ is lower for other panels (see datasheets).

SunPower cells are manufactured in the Philippines. The modules are assembled in Mexico. The company is dedicated to making the most sustainable solar panels - the Maxeon 3 was the first to be Cradle-to-Cradle Certified.

SunPower includes the following as standard in the build of its modules, improving reliability and thus facilitating the superior warranty:

The industry standard for solar panels is a 10-year product warranty covering manufacturing defects, along with a performance guarantee that the panels will generate at least 80% of their initial output to 25 years. There is inevitably conflict over the boundary between these two warranties: the 25 year output potentially depends on the panels not having any manufacturing defects - thus there is a lack of clarity in the value of the standard power warranty alone beyond the 10 year coverage of the product warranty. Further there is generally no full service warranty, covering the removal, installation and transportation costs of a failed panel.

SunPower offers a superior warranty for a number of reasons, summarised in this table:

*SunPower will pay for reasonable, necessary and actual removal and reinstallation costs of the repaired or replaced PV module up to 250 Euros for up to 5 PV modules, and 50 Euros per PV module thereafter for a single claim.

SunPower extends the defects cover over 25 years and guarantees that its panels will output 92% of their original output at the 25-year mark, rather than the 80% of the standard panel. This implies a 7% lifetime output advantage over a standard panel per watt, however, as above SunPower actually claims that their panels can produce over 20% more energy per rated Watt over 25 years.

Furthermore, in the seemingly improbable event that one of its panels does develop a fault at any point over the 25 years... SunPower will cover the complete cost of removal, replacement or repair, and reinstallation, as well as transportation costs for the return of defective panels and shipment costs for repaired or replaced panels (subject to the restrictions above).

This supreme confidence in the quality of their products distinguishes SunPower above all other manufacturers operating in the PV industry. 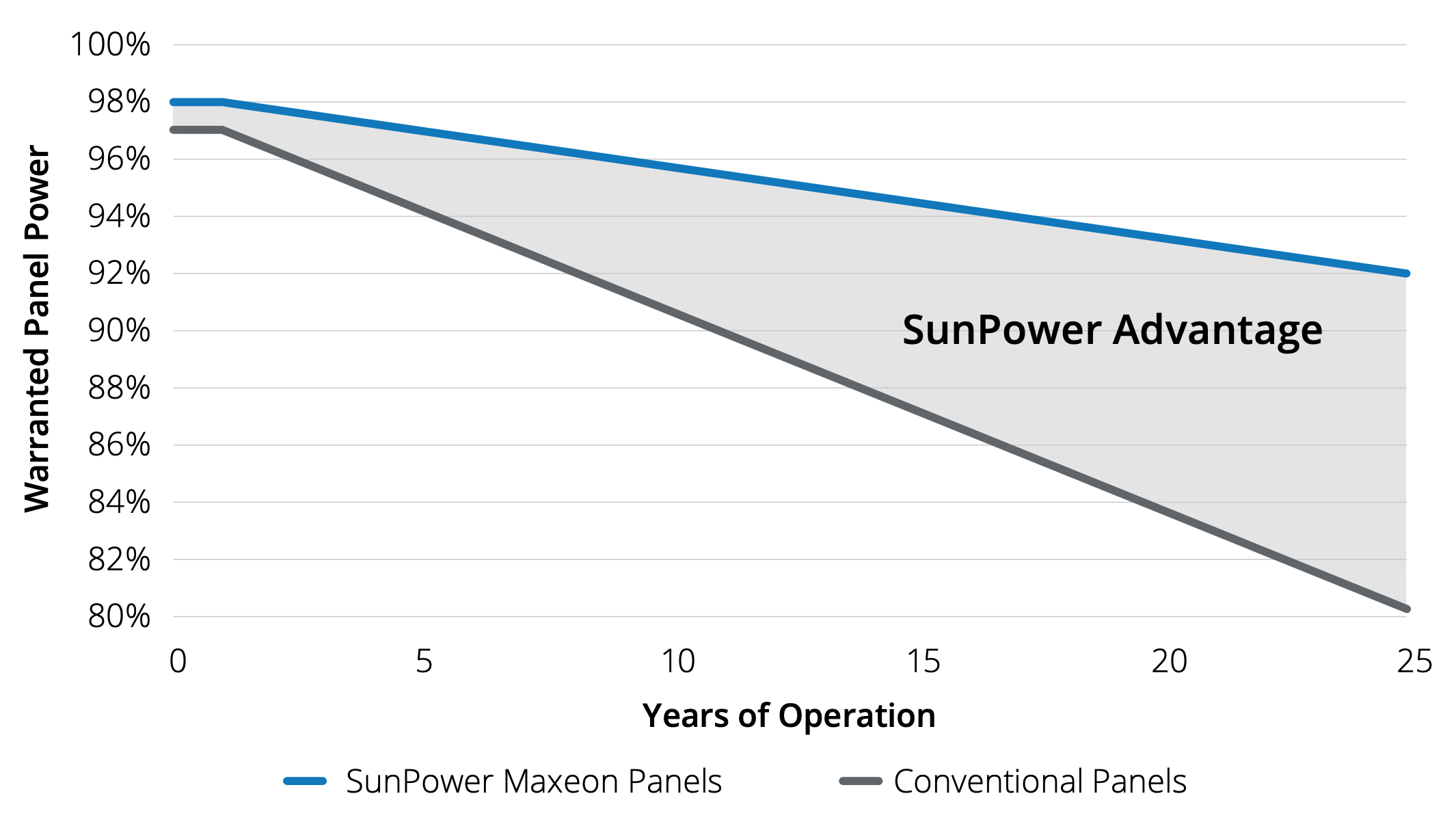 SunPower panels really do represent the best quality technology on the market, but unsurprisingly this comes at a price. That said, the Performance range is similarly priced to other high efficiency monocrystalline panels, but still benefits from SunPower's 25 year warranty.

By way of example, the 360W Maxeon 2 panel will add approximately 45% to the cost of a typical small scale installation using a standard polycrystalline panel. SunPower claims that over the lifetime it will add around 35% to the output relative to that of a similarly rated system, so for this to make sense you also have to want the better aesthetics and the better warranty.

The panels definitely come into their own when space is limited, as they represent the best way to squeeze the last bit of power out of a given space.

The 315W Performance panels will add approximately 15% to the cost of a typical small scale installation using a standard polycrystalline panel. They are much more comparable to a standard monocrystalline panel, but are generally more attractive when you consider the improved lifetime performance, reduced degradation and superior warranty.

So should you go for it?

If you can afford the additional upfront cost, we absolutely recommend you go for SunPower panels. If roof space is a limiting factor, as it often is, you will win on two counts versus a standard panel:

You will also benefit from the superior warranty cover, and you'll be making a top aesthetic choice.