Solar glass is used to replace conventional construction materials such as glazing or cladding, while also generating electricity on site.

In multi-storey buildings where roof space is often limited, facades and windows usually offer the most potential for electricity generation, thus the development of solar glazing is set to play an important role in the growth of ‘urban micro-generation’.

As well as being aesthetically pleasing and visually innovative, solar panel glass can improve the return on investment from the building.

Transparency varies from 0% (fully opaque) to 50%, with a choice of colours / aesthetics on offer.

Solar glazing can be used in many ‘BIPV’ (Building Integrated Photovoltaic) applications: 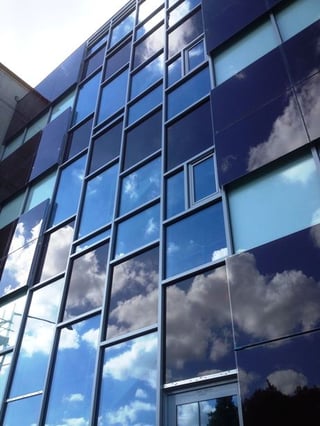 Solar glass needs to be multi-functional

As with standard roof-mounted solar panels, there are two types of solar glass available, performing in line with their non-building integrated counterparts:

The STC efficiency of thin film technologies typically ranges from 6% - 8% for amorphous silicon and up to 13% for CIS modules. However ‘standard test conditions’ – radiation of 1000W per square metre at a temperature of 25°C – rarely apply in reality, and the STC efficiency does not necessarily reflect the yield, or energy output that can be derived from these modules over a year in a given location or position.

The performance differentiation in different light levels should be considered with reference to the geographic location of the project, the local climate, the orientation of the panels on the building and the application. PV panels on a vertical facade will receive lower light levels than those optimally angled on a roof. Equally those facing north will receive less direct light than those facing south.

As well as different aesthetics (see below) thin film solar glazing has various advantages which need to be considered with reference to each specific project. These are set out on our dedicated 'thin film' page (under 'Why thin film?').

How does solar glass work?

The effect of transparency is commonly achieved in the PV module by the combination of transparent unoccupied areas and a pattern of opaque solar cells. The arrangement and distribution of the solar cells within the module thus controls the degree of transparency. This makes it possible to create interesting and innovative light effects. If the module is required to have less transparency, the intermediate areas not filled with cells can also be coloured.

Solar windows have an opacity varying between 50% transparent and fully opaque.

Achievement of ‘semi-transparency’ depends on the underlying technology. With crystalline cells, light transmission is adjusted by altering the spacing between the cells. With thin film, the active layer is partially removed to allow the light to pass through, or an ultra thin film deposition of the active solar materials is combined with two layers of transparent conductive coatings.

Conventional solar cells are generally black or blue in the case of crystalline silicon and brown or black with thin film.

To achieve colour effects that differ from the cell colour, coloured laminates, coatings or films can be used. This makes it possible to create interesting effects such as logos on PV modules or colours that match the existing building. A compromise between design and output must always be found when designing coloured solar modules.

This glazing is made using amorphous silicon technology, utilising the equivalent of powdered silicon in very small quantities. This is vacuum deposited along with transparent, conductive oxides on both glass surfaces with the active PV material between as a semiconductor. The glass is then laminated together as a sandwich to create a uniquely translucent module.

Similar in appearance to standard solar panels, glass / glass monocrystalline and polycrystalline panels achieve the highest power densities available from solar glass. The panels are available in a range of colours and transparencies.

Key features are as follows:

Get in touch to find out more about solar glass and how it could fit into your project.