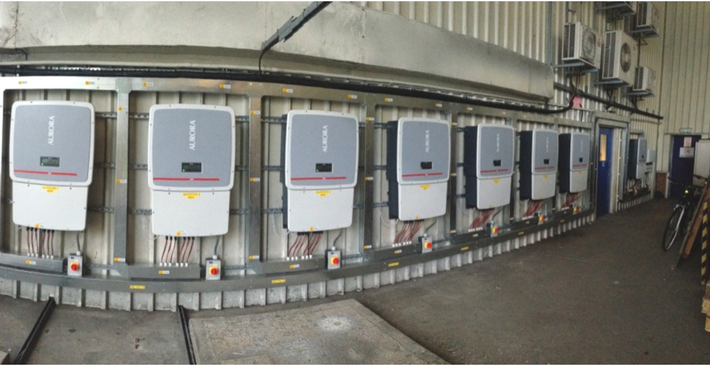 The heart of your solar PV system

Many people spend many hours wondering which panel they should choose and don’t give a thought to any other component of the system.

However the real heart of the system is the solar inverter, a very clever piece of kit which costs between £500 and £1,200 on a typical small scale / domestic system (depending on size). A typical commercial-scale inverter (20 kW) can range between £1,500 and £4,500. For this sort of money it’s worth a read on what you are buying!

The role of the solar panel inverter

The panels generate DC (direct current) electricity. However the national grid and every electrical item in the house runs on AC (alternating current) electricity. The main task of the inverter is to convert DC into AC, synchronised with the supply voltage. It also has important safety features to protect your system and to protect engineers working on the national grid in the event of a power cut on the grid. Sounds simple but if you read on you will start to discover some of the clever bits.

There are actually five different types of solar inverter in use in the solar industry as follows:

Each of these is explained below. For a brand comparison, see our best inverters page.

String inverters are the ‘standard’ inverter used in the UK for domestic and small scale commercial systems (up to around 1MW).

In solar power, a ‘string’ is a group of panels – typically up to 14 – wired together in series, and connected to the inverter. The inverter may have inputs for up to 12 strings in parallel.

The inverter optimises the performance of each string using Maximum Power Point Tracking (MPPT). Some products perform better than others, so it's worth considering if premium solar inverters are worthwhile for your project.

Micro-inverters are very small solar inverters, designed to fit one per panel, attached behind the panel. They allow optimal operation of each panel, with each panel able  operate independent of the rest of the array. They are particularly effective on complex roof layouts, or where there are shading issues. Overall micro-inverters can increase output from the array by 5%-30%. The downside is that they cost more upfront. Furthermore, because the ‘power electronics’ of the systems sit at roof level, maintenance is likely to cost more whenever access to the panels is costly (e.g. on sloping roofs requiring scaffolding). 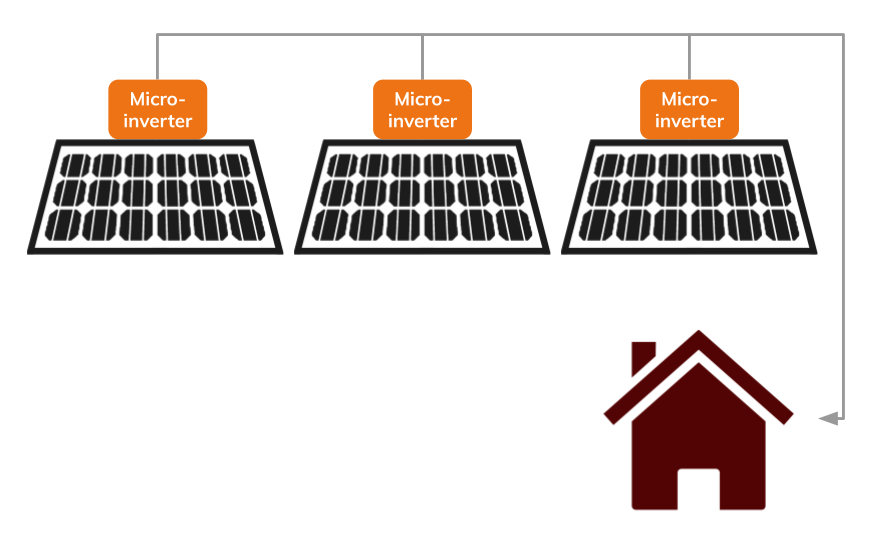 ‘Power optimiser’ based systems arguably combine the best of string inverters and micro-inverters. Rather than installing a ‘whole’ inverter per panel, power optimiser systems have a power optimiser installed behind each panel, as well as an inverter installed somewhere more accessible. Thus they allow for optimisation of the output of each panel, whilst keeping the electronics installed at ‘panel level’ are kept to a minimum. They are particularly effective where there is shade, or with complex roof layouts. 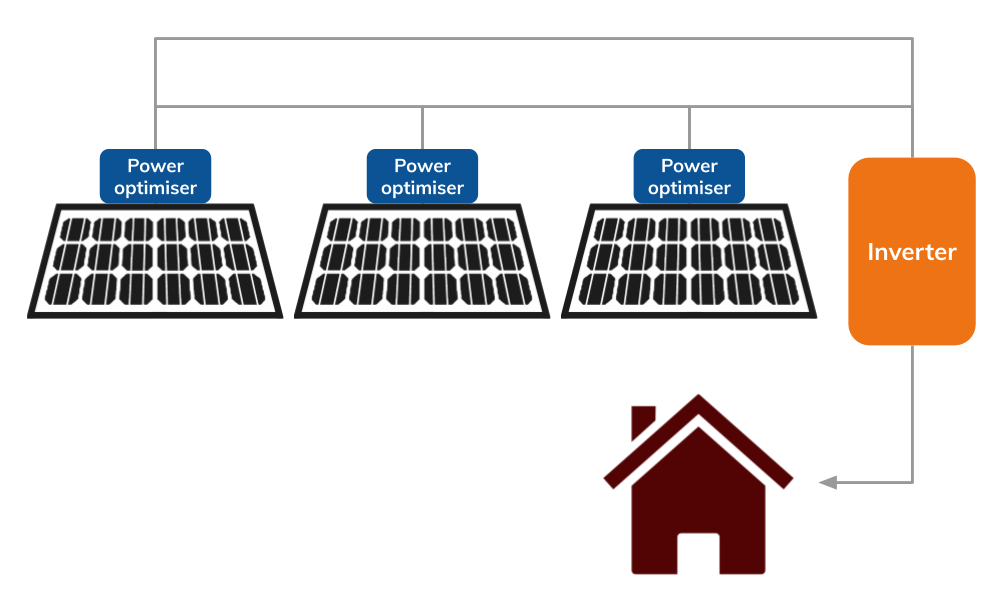 Find out more about SolarEdge systems.

Hybrid inverters combine a solar and battery inverter together in one unit, enabling DC power generated by solar (or wind) to be converted directly to AC, or to be passed through to a battery for storage, before being converted to AC. Unlike standard ‘one way’ (DC to AC) inverters, hybrid inverters work ‘both’ ways, enabling AC electricity to be taken from the grid or a generator, converted to DC and stored in the battery.

You can still add battery storage to a system designed with another type of inverter such as a standard ‘string’ inverter. However the battery will be AC coupled as in the schematic below, meaning that excess power from the solar panels will be converted from DC to AC and then back to AC again to be stored in the battery. 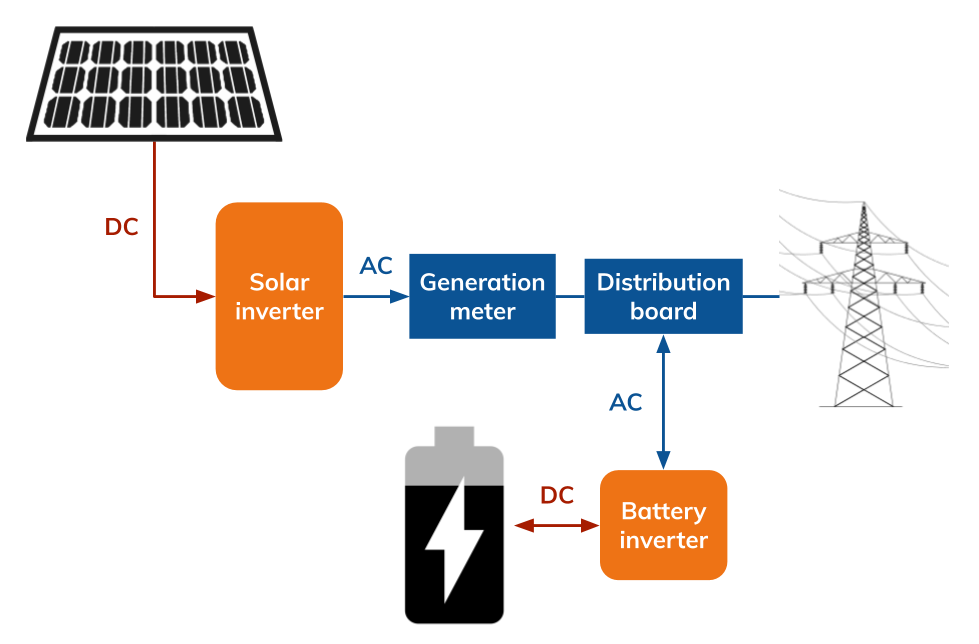 AC coupling increases AC to DC conversion losses and is not as efficient as DC coupling. It would be better to store excess solar in the battery BEFORE converting from DC to AC, as in the schematic above. Using a hybrid inverter also means that only one inverter is required for a combined battery storage and solar system. You can install a solar system without storage using a hybrid inverter, and then add storage at a later date.

Most battery storage systems are in fact AC coupled, including the very popular Tesla Powerwall 2. AC coupling makes sense when retrofitting a battery to an existing solar system which already has a solar inverter in place. However with new build properties or new solar systems being installed with storage, a hybrid inverter makes more sense.

Central inverter units start from around 100kW in size and are therefore not relevant for domestic or small scale commercial systems. They can be as large as 4MW and they are generally used on large scale solar farms to ‘centralise’ power into one place. String combiners are used to combine parallel strings of panels; these are then recombined to feed into the central inverter. The alternative is to use large numbers of small string inverters, creating a ‘distributed architecture’.

In the UK, for smaller scale solar farms (up to 5MW), string inverters tend to be preferred. 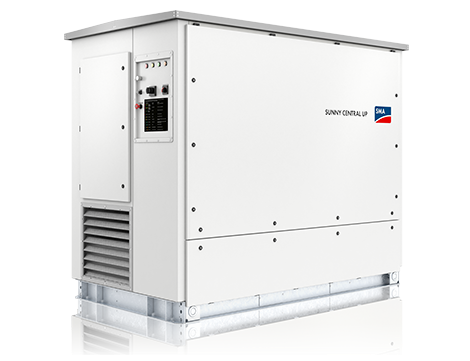 After sunrise, as soon as there is sufficient output generated by solar modules, the control unit starts monitoring the utility line voltage and frequency as well as the available energy in the panels. Once enough sunlight is received, the solar inverter starts feeding the utility transmission grid. Depending on the type of installation, a few watts of solar power will be enough do the job!

The inverter will now continue to work such that it always draws the maximum of power from the solar modules. This function is called MPPT (Maximum Power Point Tracking) and is carried out with a rate of accuracy of more than 99%! After dark, when the energy offered is no longer enough to feed the utility transmission grid, the inverter automatically cuts the connection to the grid and stops operating, of course with all settings and data being conserved.

Inverters need to meet minimum safety standards and conform to industry standard protection settings. This means that they need to monitor voltage and frequency and stop operating in case of irregular grid conditions (e.g. utility outage, interruption). If any protection setting is breached they stop the feed into the grid. This is important. In the event of a power cut engineers will work on the electricity transmission lines to find the fault. Obviously they can’t do this if your system is still pumping electricity into the grid.

The inverters also feature a high frequency transformer that ensures a galvanic separation of the DC side from the utility transmission grid.

To learn more about choosing the best solar inverter for your system, download our free PV guide: