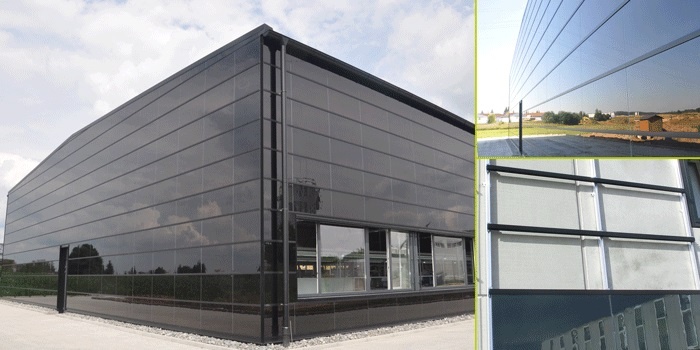 As the name suggests, thin film PV employs a very thin layer of semiconductor – usually just a couple of microns thick – in place of a traditional silicon wafer. Simpler to manufacture, thin film solar panels make more efficient use of raw materials and energy and results in both lower costs and a smaller manufacturing carbon footprint.

There are three types of thin film product:

A typical thin film solar panel consists of the semiconductor and several other thin films bonded to a sheet of glass, covered by another sheet of glass and sealed in with an industrial laminate. Some companies and researchers are focused on the development of alternative formats, including flexible thin film solar modules.

A thin film membrane has solar cells embedded in a flexible membrane.

Such sources of shade can be minimised by careful planning in order to maximise the incident solar radiation. Simulations of the daily and yearly path of the shadows can be carried out to enable the position of the solar modules and the orientation and structure of the building to be optimised accordingly. If shading cannot be completely avoided, its effects can be mitigated by using the appropriate module technology, the module design and the electrical connection of the modules best suited to the environment.

A key difference between crystalline silicon modules of thin film technologies is their shade resistance due to string length. Thin film modules are designed to be high voltage and so are linked in parallel rather than in series in long strings. This means that if one module is shaded the rest of the system is not affected. Each module is therefore optimised. This effect can be replicated on crystalline modules with the use of a product such as SolarEdge, with one power optimiser per module, however this typically adds 10-15% to project costs.

The “rated output” of a panel is determined at a cell temperature of 25°C, (Standard Test Conditions (STC) meaning solar irradiance of 1,000 W/m², zero angle of incidence, solar spectrum of 1.5 air mass and 25°C cell temperature).

In fact at an outside air temperature of 20°C, the cell temperature will be much higher than 25°C, and the output will be lower as a result (output decreases with increasing temperature).

The extent to which the output will fall is determined by the “Nominal Operating Cell Temperature” (NOCT) and the Maximum Power Temperature Coefficient.

The NOCT is defined as:

The Maximum Power Temperature Coefficient is essentially the change in power output due to increases in cell temperature above 25°C.

For example, a St Gobain thin film module has a NOCT of 40°C and loses 0.39% of its power output for every 1°C increase in cell operating temperature above 25°C.

In contrast, an ET module has a NOCT of 45°C and loses 0..44% of its power output for every 1°C increase in cell operating temperature above 25°C.