What are high efficiency solar panels?

A standard solar panel has an efficiency in the range of 12-17%. In terms of commercially available products, a high efficiency panel is one that is 20-25% efficient (solar tracking, research or theoretical cells can be even higher, though not necessarily as financially viable). Lower efficiency panels are thin film or polycrystalline, while higher efficiencies are achieved by monocrystalline cells.

High efficiency solar modules can be vital for getting the most power out of smaller roof spaces, or to allow room for extending a system when more power may be required in the future - for example, if investing in an electric car.

By far the most commonly used material is silicon, which is the main component of quartz sand and, after oxygen, is the second most common element in the Earth’s crust.

Crystalline silicon panels make up 80-90% of the solar panel market and have dominated the market since the 1950s. Panels are either multi-crystalline (polycrystalline) or monocrystalline.

The performance of a solar cell is measured in terms of its efficiency at turning solar radiation or ‘sunlight’ into electricity. A typical solar cell has an efficiency no greater than 12-17% as only a portion of the sunlight energy spectrum can be converted into electricity and much of the sunlight is reflected or absorbed by the materials that make up the cell. If this seems off-putting bear in mind that a coal power station has an energy conversion efficiency of up to 40% and that a further 7% of the electricity generated is lost during the long distance transmission to the consumers – you and I.

Here is an overview as to the properties of the types of commercial solar cell available today.

How solar panels are made more efficient

Until a few years ago (around 2013), most solar cells were designed with an aluminium back surface field (Al-BSF), at the bottom, as in the following diagram: 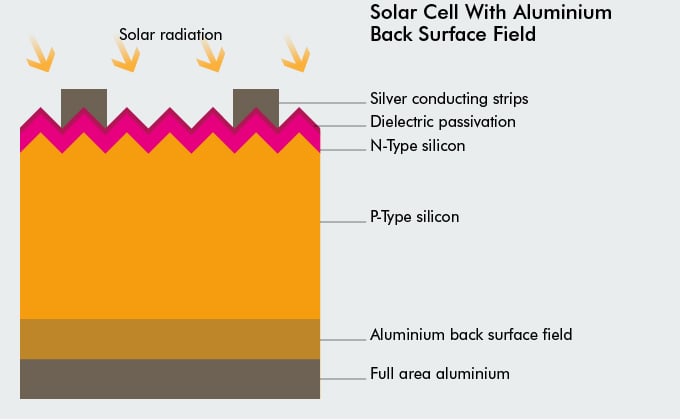 More recently, the passivated emitted rear contact (PERC) structure has developed, as per this diagram: 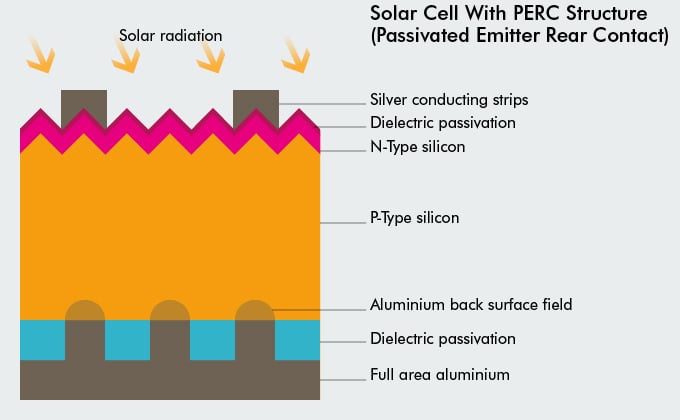 The main difference is at the rear where the full area aluminium alloyed back contact (Al-BSF) is replaced by a dielectric passivation layer (SiO2, SiN2, Al2O3), a dielectrically displaced mirror, and local aluminium alloyed contacts. The purpose of this is to reduce surface recombination of photogenerated electron-hole pairs at the rear surface. This in turn boosts open circuit voltage and efficiency. The mirror results in an increase in the rear internal reflection for near bandgap photons, which increases the short circuit current density of the solar cell

As can be seen in the table above, PERC improves efficiency by a reasonable percentage.  It also improves cost.

The PERC solar cell is predicted to become the dominant solar cell in the industry in the next few years. 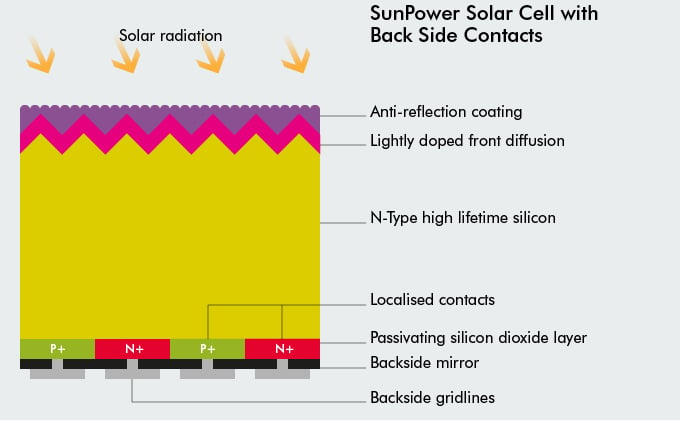 One of the latest PV trends is bifacial modules - these are where the solar cells are exposed on both the front and back of the panel. In ground-mount or carport style installations, light reflected off the ground is picked up by the reverse side of the panel, generating extra power.

Some manufacturers are claiming an uplift of up to 30% (we’re assuming this is for utility scale solar farms with tracking systems). Nevertheless, depending on the reflectiveness of the ground surface - white pebbles are much better than grass for instance - efficiency on a typical installation can easily be increased by up to 8%.

A traditional solar cell has a single p-n junction made from one semiconductor material. In a multijunction solar cell, multiple p-n junctions are made from different semiconductor materials, which each respond to different wavelengths of light. By absorbing a broader range of wavelengths, the cell can produce more electricity from the same input of sunlight. Theoretically, an infinite number of junctions could reach an efficiency of around 87% (compared to a single junction theoretical limit of 34%), but practical limits reached are around 30%.

Concentrated photovoltaic (CPV) systems use curved mirrors and lenses to intensify the light hitting multijunction solar cells. This relies on focusing the sun’s rays at the correct angle, so solar trackers are used to tilt the panels throughout the day. Additionally cooling systems can further increase efficiency, boosting the overall efficiency to upwards of 41%. Due to the additional mechanics and maintenance, these types of cells being developed would be suited to utility solar farms.

What are the most efficient solar panels on the market?

At Spirit, there are a number of higher efficiency panels on the market that we can install in residential or commercial properties. We usually recommend these when space is limited, to maximise generation from the available area.

Get in touch with us today for a free recommendation on which panels will provide the best efficiency for your home.